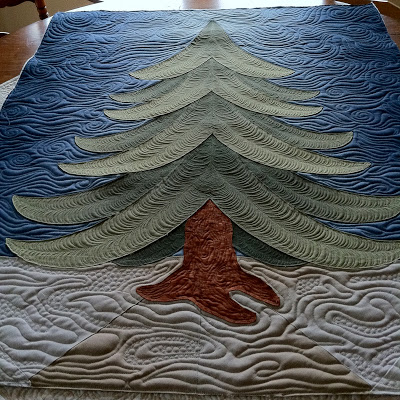 Winter officially arrived last night in the form of a snow storm.  Yuck!  It’s been mild and lovely here and then all of the sudden it was a blizzard!  Heavy, destructive snow.  School was cancelled today for the girls.  While I enjoy having them home, I can’t get much done.  Elaina had been home anyways, which worked out well for her to have a day off of school.  We ended up taking her to the doctor on Monday.  Her fever wouldn’t break and she was just so sick.  I thought we were going to need to go to the ER, but doctor got us in last minute.  Turns out she has a form of strep.  Not the typical one they test for in the office.  They sent her cultures to the hospital.  She’s on antibiotics now and wow have they been miracle drugs for her.  She is getting back to herself and feeling much better.

I am very happy with how it turned out!  I have some experience quilting Alpine Wonder as I’ve quilted my own version.  However, that was long before I had my longarm and FMQ it on my sewing machine.  I posted it here.  I’m pleased to say it went much faster on the longarm, but it still took me way longer than I thought it would.  Naturally. 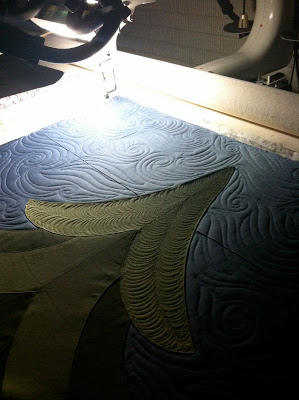 I used a variegated blue thread for the sky which I did not get a good photo of.  It was a actually a cotton King Tut thread.  First time I tried it.  I had a little spool and it was perfect.  Surprisingly no issues. 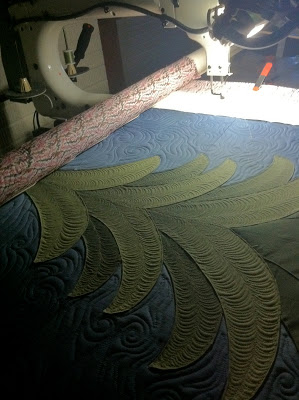 On the branches I used a light green Bottom Line thread on top and So Fine in the bobbin.  This was the first time I used Bottom Line on the longarm too.  Again, no issues.  It is left over from when I quilted my Alpine.  I had a terrible time FMQ with the Bottom Line on my sewing machine.  Thread was shredding like crazy.  I’m sure it was operator error. 🙂  I was so happy to get the tree done.  It took me nearly an hour per branch level!!!!  Lots of quilting there!! 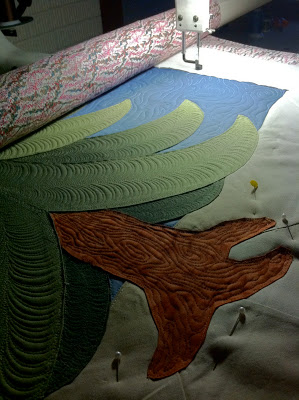 I used So Fine thread on the trunk.  I love how the trunk came out!! It’s my favorite. 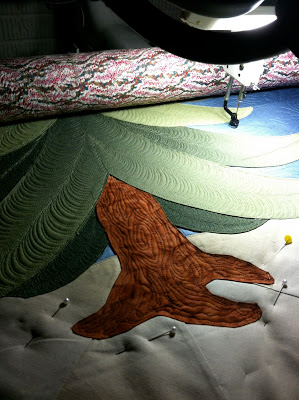 Finally, on the snow,  I used So Fine thread again.  Pebbling and swirly snow.  Makes it look a little like trapunto.

I used Hobbs 80/20 batting.  June was thrilled with her Alpine.  She is going to apply all clear crystals on it.  I think that will look sharp.  I used colored on mine.  June already has a place to hang her Alpine!

So this is what it looks like out my back porch.  As you can see the girls and Sarge have already been playing in the first snow by all the tracks! 🙂 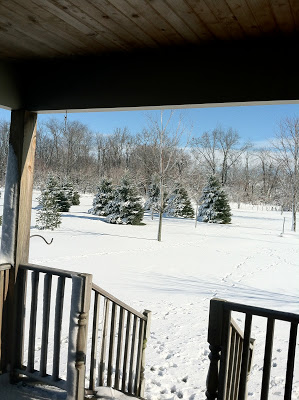 Hope everyone has a great day.  December 1st tomorrow??!!!