In The Sprit of Christmas

I mentioned on Monday’s post that Elaina was sick last Friday and missed her last elementary school class party.  Elaina was not your “typical sick” like with a cold or the flu.  Elaina suffers from a chronic illness.  She was diagnosed several years ago with Cyclic Vomiting Syndrome or CVS.  Her first episode or spell with CVS was when she was only 12 months old.  What happens when she is sick, you ask??  During a spell, Elaina will be sick for 4 days.  Elaina will vomit bile intermittently for the first 2 days.  Sometimes she vomits 4-6 times in an hour.  Poor thing will wretch and wretch.  She spends the third day almost comatose.  She only sleeps.  When she does get up, we have to carry her.  She is too weak and lethargic to do anything on her own.  She may by the end of the third day sit up on the couch.  By the fourth day, she is almost functioning normal, but she still has trouble walking or focusing on things.  Her spells have grown further apart over the years.  She used to suffer about every 7-8 weeks.  Now she has a spell every 11 1/2 weeks to the day.  The time in-between spells she is perfectly healthy.  Some spells are more severe than others.  Many who suffer from CVS claim to have a trigger.  Maybe a food or excitement.  Elaina is very difficult for doctors to understand because her spells come like clockwork.  Only time is a trigger.  We know EXACTLY when she will be sick.  I mark the calendar and then pray in-between spells that maybe it will just never come.  We have taken her to dozens of specialists.  We’ve had countless trips to the ER over the years.  We currently travel to the Cleveland Clinic to see a team of specialists there.  Medications never work.  They might just mask some of the symptoms or control the vomiting.  We have tried everything from special diets to non-conventional therapies.  Nothing works.  No one knows the cause.  Alyssa is her identical twin, but is not sick.  Yes, it’s been heart wrenching for us and frustrating as well.  I always schedule events or vacations around when she supposed to be sick.  I can literally look at the calendar 11 1/2 weeks from now and know when she’ll be sick.  I feel our only hope is that she might outgrow it some day.

Now based on when Elaina was sick last summer, I knew at the beginning of the school year she would be sick either for her Christmas program or her party.  Everyone at school was aware too and really pulling for Elaina that she would beat it this time and not get sick.  So when she was sick on Friday everyone was devastated.  I’m going to get emotinal as I write this, Mrs. Winchell (the girls’ teacher) arranged and got permission to do something very special for Elaina.  We got a call from the school explaining her plans.  After a while, the doorbell rang and it was Alyssa accompanied by Mrs. Winchell and the whole class in our front yard!  Scott told Elaina (who was in her pj’s) shw needed to get her boots and coat on because she had a visitor, which just baffled her.  When she opened the door, Elaina’s face just brightened up and her smile went from ear to ear!  Her class sang “Rudolph the Red Nose Reindeer” to her!  They presented her with cards, including one from the principal.  AND Mrs. Winchell gave Elaina a special little poinsettia!  Elaina said it was one of the best days of her life!

What an amazing teacher!  Not only what Mrs. Winchell did for Elaina and our family, but also what she did for the rest of the class.  She really taught them so much about the spirit of Christmas.  I heard the kids were so excited when they got back to school!  They were telling everyone about how much it meant for them to do that for Elaina.  The story has spread through our small town as well.  My family will never forget what Mrs. Winchell did for ALL of us.  I know I heard a little bell ring that day because Mrs. Winchell earned her wings. 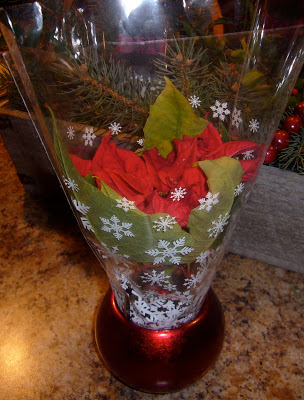 I would like to wish everyone and their families a very