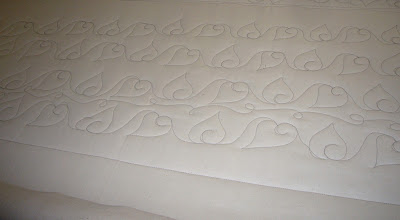 Back In The Saddle Again

Wednesday ended up being a much needed day of rest for me.  Alyssa got sick during the night Tuesday, so she stayed home from school.  Yuck!  As a result, the two of us vegged out and had a total pajama day!  It was exactly what I needed.  Except for when the UPS man arrived at the front door for a signature and I was still in my pj’s.  Don’t you hate it when that happens??  By the time dance time rolled around, Alyssa felt well enough to go, which meant some quiet time in the library for me.  Yippee!!  I got quite a bit accomplished.  I finished another “Hop To It” wool block.  I’ll share that soon.

By the time homework and baths were done and the girls were in bed, it was just about time for me to go to bed too.  I just couldn’t go to bed after another day without some play time on my A-1.  It had been long enough!   So I went down to my studio and played for a bit.  I think the little break from practicing did some good because I just felt energized and creative again!  I worked on developing another allover freehand design.  Some of Jamie Wallen’s “Chubby Leaves.” 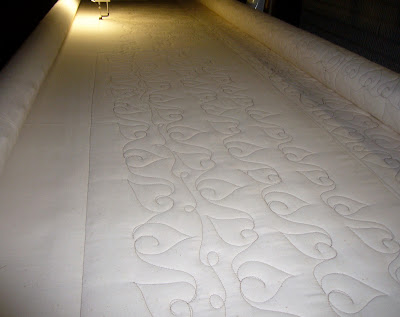 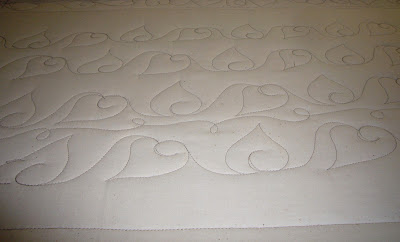 Then I tried doodling some smaller scale ones.

I decided to call it a night and advance my practice piece so it would be ready to go the next day.  Just as I was going to shut it down for the night, I thought why not try some feathers??  Jaime suggested waiting a few months to attempt them, so I didn’t get discouraged.  At the last second, I said to myself “Go for it!”  My first feathers on my A-1… 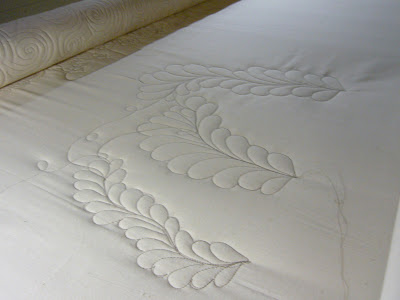