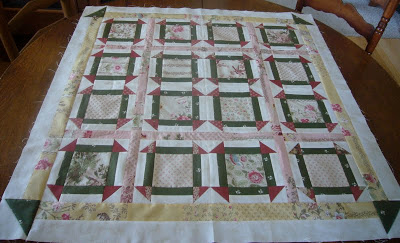 Woo-hoo!!! I actually finished July’s Le Petite project in time for the parade on Sinta and Sherri’s blogs!!  I sewed a few minutes here and there and somehow managed to get it pieced!  I still don’t know how I did it!!  July’s Le Petite was George Schnibbles by Carrie Nelson for Miss Rosie’s Quilt Co.

I used leftover charms squares of Pom Pom de Paris and the green is from Fa La La, both by French General.  The Green is from French General’s new Christmas line.  The green is a great mixer to add to a lot of the French General lines.  The background is a Primitive Muslin from Primitive Gatherings.  My new favorite go-to background.  I love how pretty it turned out.  Schnibbles never disappoint!  I think I will change the name of mine to Georgette because it has such a pretty, feminine look. 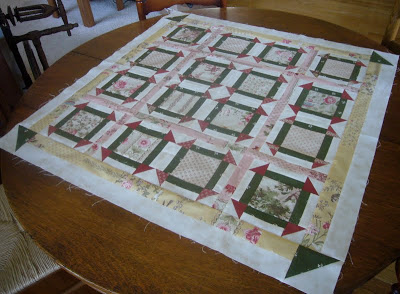 I now have a coordinating table topper and table runner.  I used Pom Pom de Paris for a previous Le Petite (I posted about it here)  and made a table runner for my kitchen island. 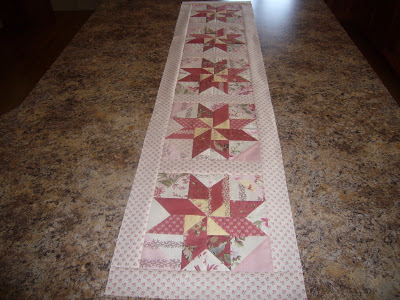 My sister brought her kitty Scooter home over the weekend.  Scooter will be living with us for the next year because Kristin starts her Clinicals at the end of the month.  Kristin is in grad school to become a Physician’s Assistant.  She will spend her Clinicals traveling all over the state and will not be able to travel with Scooter.  I don’t think Scooter minds staying with us.  This kitty loves to quilt!! 🙂 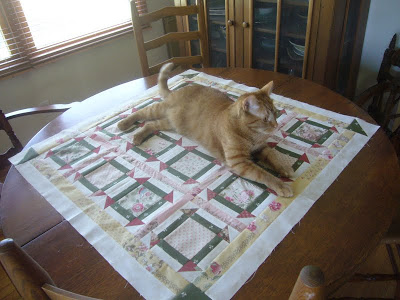 He made himself right at home!  Make sure you stop by Sinta’s and Sherri’s blogs later and see the parade of all the different versions of George.