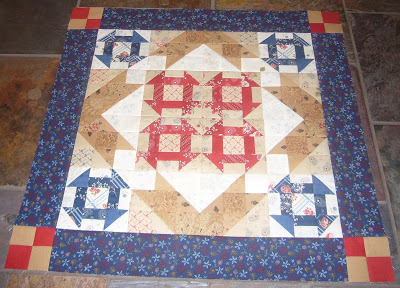 Nothing but quilting going on here.  What have I been quilting??  Practice, practice and practice quilting.  I wish that patience could be one of those “P” words.  My patience is definitely being tried.  I have spent the last several days, except the days I worked, practice quilting on Annie.  I’ve been practicing backtracking, all over designs and feathers.  I’ll be honest with you, it’s hard when you want so badly for your quilting to look really good and it doesn’t.  It looks better every day, but I want perfection NOW.  I’m trying really hard to stay positive.  I know that much of it is because I am a perfectionist and I am overly critical.  Fortunately, Scott has been my personal cheerleader and counselor.  I’m pretty sure last night he could have been wearing a jersey with the initials “QP” on the front with pom poms in his hands! 🙂  We made a pact that he would give me his honest opinion on my quilting.  If it looks bad, then he’ll tell me and I promise not to get mad at him.  I need a voice of reason because sometimes I swear I think my quilting is worse than it really is.  If Scott tells me my quilting looks good, then I know he’s not just saying that to be nice.

Remember “Butter Churn?”  It was the Le Petite quilt for November.

I decided last night this would be my next flimsy to quilt.  I’m almost done with the quilting.  I was going to finish it up, but it was getting pretty late.  I can finish it up this morning. 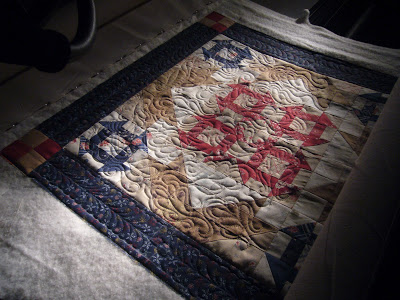 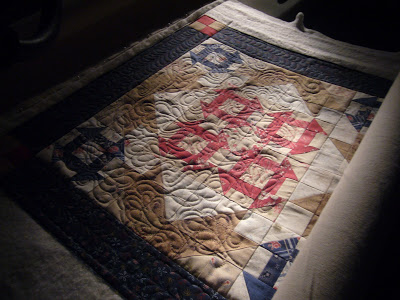 I did an allover over swirly feather design in the body and a feather border.  I am very pleased with my quilting.  AND a bit relieved.  I think I like to see the quilting in pictures.  I have a better appreciation for how it looks.  It’s hard to tell while I’m quilting it.  I’m trying to learn to quilt feathers from all directions especially in the borders, so I don’t have to turn the quilt.  I just have the last part of the body of the quilt to do and the four patches in the corners.  Not sure how I’ll quilt the four patches yet.  I also did a partial float on this quilt because it’s so small.  Saved me pinning the quilt top to the leaders.

I have my next quilt top on deck to be quilted.  I’m doing a much bigger one next.  I’m thinking these small quilts take almost as much time as a big one would!!

Happy Valentine’s Day everyone!  The girls have the day off today.  We are going to have a nice, relaxing day at home today.