I’ve been suffering a bit from “Quilter’s Block” the last few days.  Well, ever since I went frogging the other night.  I just couldn’t decide what to quilt on my little Paganini.  One thing I DID know was that I needed to press it again.  I almost did and it’s a good thing I didn’t because I had some blue pen markings on it!!  Oh, I would have been SOOOO  mad if I had permanently set the markings.  That would have been just my luck, the first time I use one of those little blue pens…I ruin my quilt top.  So I wet down the top to remove them.  Meanwhile, I doodled designs.  I finally decided on a design, thought I would press the top, but there was still some blue left.  So…..another rinse down. Ugghh, I felt like was wasting so much time. Between all this I loaded my practice muslin back on.  I practiced the design I decided I wanted to quilt on Paganini.  After practicing, I realized the quilting called for some finer weight thread. I put a thread order in last night.  I’m glad I ended up having to wait because I wouldn’t want to be frogging that little top again!!

I decided maybe Paganini was causing my little case of quilter’s block, so I turned my attentions last night to something else.  New quilt top.  New quilt design.  It’s not done, but I’m loving it already!!  It’s just the boost I needed to get past my quilting blockade.  I’m just going to give you a peak.  Just a teaser.  🙂 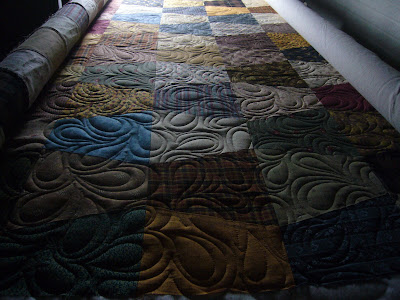 Hopefully, tomorrow I’ll be able to show the whole thing!!